Over the last forty years, Stuart Woods has written more than ninety novels of suspense and intrigue, beginning with the award-winning Chiefs. Featuring iconic crime-fighting and jet-setting leads, the plots are masterfully conceived and wonderfully escapist. What many readers don't know is that Woods's very own life was filled with similar stories of adventure. Born in Georgia, Woods worked in advertising in New York, served in the US Air Force, and had a short stint as an advance man. At the age of 37, he found himself in a transatlantic sailing race, and pursued writing as a full-time career shortly thereafter. Along the way, Woods has lived all over the world, from New York to London, Santa Fe to Ireland. Incorporating his iconic sailing memoir Blue Water, Green Skipper, this is the story of a life well-lived, and a special inside look into the beloved author's many exploits..... 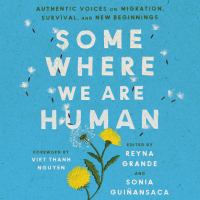 Somewhere we are human : authentic voices on migration, survival, and new beginnings

In the overheated debate about immigration, we often lose sight of the humanity at the heart of this complex issue. The immigrants and refugees living precariously in the United States are mothers and fathers, children, neighbors, and friends. Individuals propelled by hope and fear, they gamble their lives on the promise of America, yet their voices are rarely heard. This anthology of essays, poetry, and art seeks to shift the immigration debate—now shaped by rancorous stereotypes and xenophobia—towards one rooted in humanity and justice. Through their storytelling and art, the contributors to this thought-provoking book remind us that they are human still. Transcending their current immigration status, they offer nuanced portraits of their existence before and after migration, the factors behind their choices, the pain of leaving their homeland and beginning anew in a strange country, and their collective hunger for a future not defined by borders. Created entirely by undocumented or formerly undocumented migrants, Somewhere We Are Human is a journey of memory and yearning from people newly arrived to America, those who have been here for decades, and those who have ultimately chosen to leave or were deported. Touching on themes of race, class, gender, nationality, sexuality, politics, and parenthood, Somewhere We Are Human reveals how joy, hope, mourning, and perseverance can take root in the toughest soil and bloom in the harshest conditions.....

Séamas O'Reilly's mother died when he was five, leaving him, his ten (!) brothers and sisters, and their beloved father in their sprawling bungalow in rural Derry. It was the 1990s ; the Troubles were a background rumble, but Séamas was more preoccupied with dinosaurs, Star Wars, and the actual location of heaven than the political climate. An instant bestseller in Ireland, Did Ye Hear Mammy Died? is a book about a family of loud, argumentative, musical, sarcastic, grief-stricken siblings, shepherded into adulthood by a man whose foibles and reticence were matched only by his love for his children and his determination that they would flourish.....

The importance of not being Ernest : my life with the uninvited Hemingway

"By a series of coincidences, Mark Kurlansky's life has always been intertwined with Ernest Hemingway's legend, starting with being in Idaho the day of Hemingway's death. The Importance of Not Being Ernest explores the intersections between Hemingway's and Kurlansky's lives, resulting in vivid accounts of two inspiring writing careers. Travel the world with both authors in this entertaining and illuminative memoir, where Kurlansky details his ten years in Paris, his time as a journalist in Spain, and anecdotes set in Key West, Havana, and Ketchum, Idaho--all places important to Hemingway's adventurous life and prolific writing."--Back cover.....

The war on the West

It is now in vogue to celebrate non-Western cultures and disparage Western ones. Murray shows inconsistent anti-West rhetoric is in part an intellectual fraud perpetuated by hostile nations and human rights abusers hoping to distract from their own ongoing villainy. Dictators who slaughter their own people are happy to mimic the language of antiracism and "pro-justice" movements while making authoritarian conquests. He provides an incisive takedown of foolish anti-Western arguments, as well as a rigorous new apologetic for civilization itself. -- adapted from jacket....

A way out of no way : a memoir of truth, transformation, and the new American story

On the heels of his historic election to the United States Senate, Raphael Warnock shares his remarkable spiritual and personal journey Senator Reverend Raphael Warnock occupies a singular place in American life. As Senior Pastor of Atlanta's Ebenezer Baptist Church and now as a Senator from Georgia, he is the rare voice who can at once call out the uncomfortable truths that shape contemporary American life and, at a time of division, summon us all to a higher moral ground. Senator Warnock grew up in the Kayton Homes housing projects in Savannah, the 11th of 12 children. His dad was a World War II veteran, and as a teenager, his mom picked tobacco and cotton in rural Georgia. Both were Pentecostal preachers. After graduating from Morehouse, Dr. Martin Luther King Jr's alma mater, Senator Warnock studied for a decade at Union Theological Seminary while serving at Harlem's Abyssinian Baptist Church. At just 35, he became the senior pastor at Ebenezer, where Dr. King preached and served. In January, Senator Warnock won a run-off election that flipped control of the Senate at one of the most pivotal moments in recent American history. He is the first Black senator from Georgia, only the 11th Black senator in American history, and just the second from the South since Reconstruction. As he said in his maiden speech from the well of the Senate, Senator Warnock's improbable journey reflects the ongoing toggle between the pain and promise of the American story. A powerful preacher and a leading voice for voting rights and democracy, Senator Warnock has a once in a generation gift to inspire and lead us forward. A Way Out of No Way tells his remarkable American story for the first time.....

If we break : a memoir of marriage, addiction, and healing

The former wife of Hunter Biden discusses the heartbreaking collapse of her marriage, which ended in 2017 amid his then-secret struggles with addiction, and her own journey of self-discovery to reclaim her identity.....

Directed by James Burrows : five decades of stories from the legendary director of Taxi, Cheers, Frasier, Friends, Will & Grace, and more

From the director of The Mary Tyler Moore Show, Taxi, Cheers, Frasier, Friends, and Will & Grace comes an insightful and nostalgic memoir that offers a bounty of behind-the-scenes moments from our favorite shows, peeling away the layers behind how a successful sitcom comes together--and stays that way. In Directed by James Burrows, the legendary talent not only provides backstories into the genesis and casting of the dozens of great sitcoms he directed, Burrows also offers insight into how these memorable shows are created, how they get on the air, and how the cast and crew continue to develop and grow each season, all coupled with tales of his challenges, career victories, and defeats, as well as advice for those who aspire to direct. All this from the man who helped launch the careers of Ted Danson, Kelsey Grammer, Woody Harrelson, Jennifer Aniston, Debra Messing, and Melissa McCarthy. Readers will discover the childhood and young adult influences and experiences that inspired Burrows, including, first and foremost, his father, legendary playwright and Broadway director Abe Burrows. Directed by James Burrows explores Burrows's journey in theater and television, including his first gigs in "the family business" in the late 1960s, his start working on Broadway and regional theater, directing, stage managing, and building sets. Hoping that his theatrical experience could be transferable to TV directing, he applied for a job with The Mary Tyler Moore Show. From there, he became a sought-after television director. His major break came with Taxi, for which he directed more than half of the series. Forming a partnership with writers/producers Glen and Les Charles, he then co-created the mega-hit Cheers, directing most of its episodes. Burrows went on to direct the pilots and multiple episodes of Frasier, Friends, Mike & Molly, The Big Bang Theory, and Two and a Half Men, plus all 246 episodes of Will & Grace and episodes of more than a hundred other shows. A heart-and-soul master class in sitcom, Directed by James Burrows reveals what it truly takes to get a laugh.....

Corrections in ink : a memoir

Keri Blakinger always lived life at full throttle. Growing up, that meant throwing herself into competitive figure skating with an all-consuming passion that led her to nationals. But when her skating career suddenly fell apart, that meant diving into self-destruction with the intensity she once saved for the ice. For the next nine years, Keri ricocheted from one dark place to the next: living on the streets, selling drugs and sex, and shooting up between classes all while trying to hold herself together enough to finish her degree at Cornell. Then, on a cold day during her senior year, the police caught her walking down the street with a Tupperware full of heroin. Her arrest made the front page of the local news and landed her behind bars for nearly two years. There, in the Twilight Zone of New York’s jails and prisons, Keri grappled with the wreckage of her missteps and mistakes as she sobered up and searched for a better path. Along the way, she met women from all walks of life―who were all struggling through the same upside-down world of corrections. As the days ticked by, Keri came to understand how broken the justice system is and who that brokenness hurts the most. After she walked out of her cell for the last time, Keri became a reporter dedicated to exposing our flawed prisons as only an insider could. Written with searing intensity, unflinching honesty, and shocks of humor, Corrections in Ink uncovers that dark, brutal system that affects us all. Not just a story about getting out and getting off drugs, this galvanizing memoir is about the power of second chances; about who our society throws away and who we allow to reach for redemption―and how they reach for it.....